No Result
View All Result

Update: Iowa’s 2nd Congressional Race Could Be Determined By Handful of Votes

Kevin Hall, a spokesperson for the Iowa Secretary of State’s office, told The Iowa Torch that the results currently only reflect recounts in 17 of the district’s 24 counties. Appanoose, Cedar, Davis, Decatur, Des Moines, Keokuk, Lee, Louisa, Lucas, Mahaska, Marion, Monroe, Muscatine, Van Buren, Wapello, Washington, and Wayne counties have completed their recount and their results are reflected in the unofficial results. (Update: 21 counties are now complete. Clinton, Johnson, and Scott counties have not completed their recount.)

Jasper County recount results are not yet included in the totals and the Hart campaign said their candidate picked up nine votes. Their recount process is under dispute.

There is disagreement over results provided by a machine that broke down after a machine recount of absentee ballots begun. The Hart campaign said the Miller-Meeks campaign is balking at a process they agreed to.

“Last Saturday, at the urging of the designee appointed by Mariannette Miller-Meeks, the Jasper County recount board voted to conduct a machine recount of absentee ballots,” Zach Meunier, Rita Hart’s campaign manager, said in a released statement.

“However, the machine broke shortly after the recount began. Miller-Meeks’ Campaign’s designee insisted on waiting for the machine to be repaired, which the recount board agreed to do. Now, a machine recount of the absentee ballots has been completed with the repaired machine and Rita Hart has netted nine votes.”

“Unfortunately, as is quickly becoming a pattern across multiple counties including Scott County, the Miller-Meeks Campaign is unwilling to play by the rules they sought at the beginning of the recount, and now disputes the machine recount that was conducted at their urging. The point of a recount is to get a final, correct vote total, not recount and recount until one candidate is satisfied with the outcome. The Miller-Meeks campaign can’t count the ballots again or introduce some new process simply because the margin narrowed,” he added.

“The Hart campaign has reached a new low by wanting to use numbers from a broken machine. When the Jasper County recount board met they agreed to a machine recount. But the optical-scan machine broke down before it could be started. When the technician replaced the broken parts, the machine could not read the ballots reliably. Remember, this county has already been through a recount ordered by the Secretary of State. That machine count matched the corrected numbers in the certified results. Now, when the machine breaks down, the Hart campaign thinks they won some kind of victory,” he said.

“The Miller-Meeks for Congress campaign is committed to integrity in the recount process. The law must be followed and broken vote-counting machines should be properly fixed before they are used. If the Hart campaign thinks its path is through breaking the law and broken vote counting, they should do the decent thing and concede already,” Woolson added.

On Sunday, the Miller-Meeks campaign objected to the Scott County recount process they said was contrary to state law and the Iowa Secretary of State’s guidance. The Hart campaign claimed they agreed to the process. On Monday, they provided a photo of one of the recount sheets as proof that they never agreed to the Scott County process. They said their representative voted against it and signed “with objection noted” on the recount sheet. 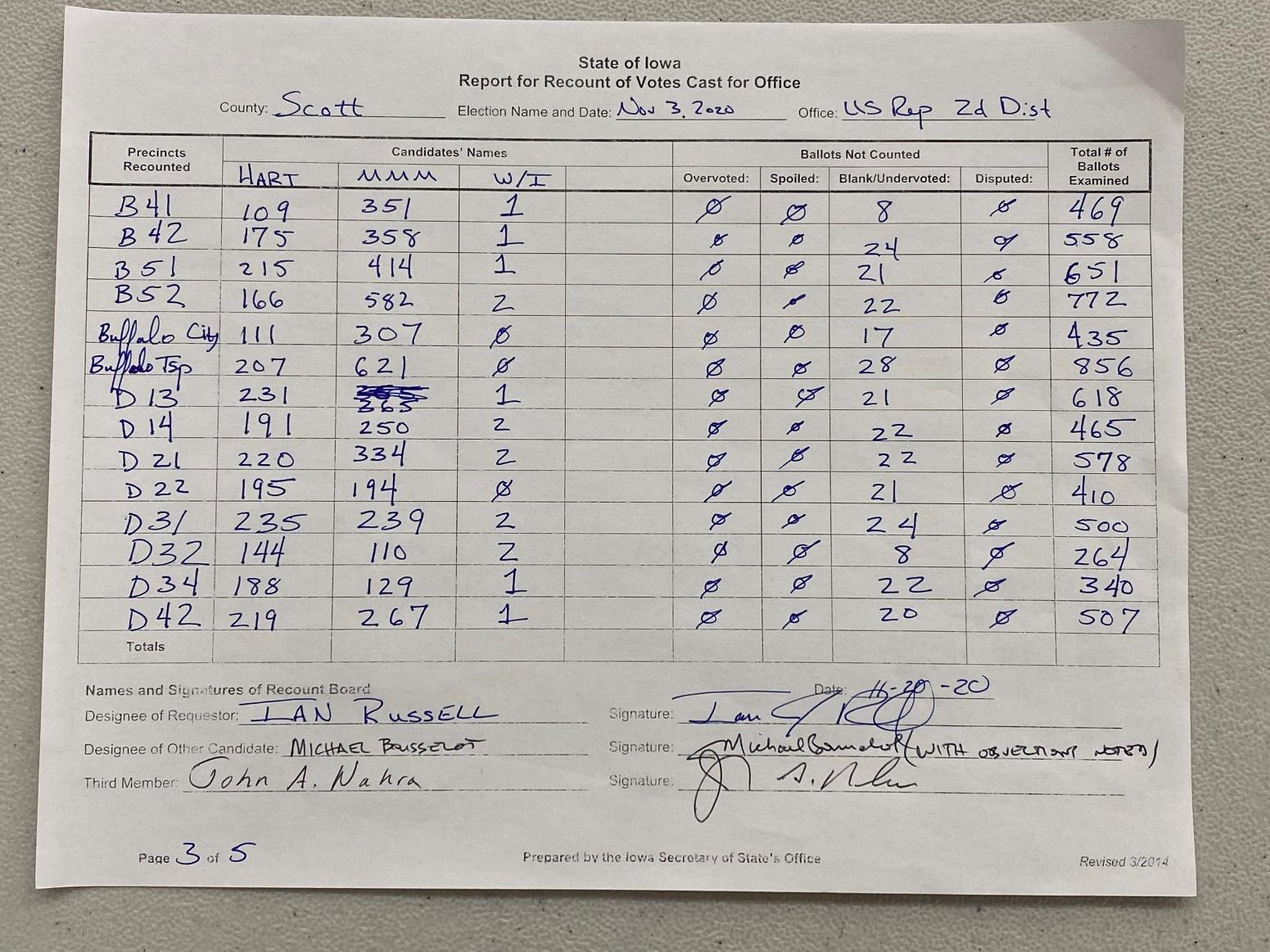 Update: Johnson County Auditor’s office has confirmed that they completed their recount. Unofficially, Rita Hart netted three votes. It will not be official until the county canvasses the results.

Scott County is interesting. The Scott County Board of Supervisors canceled their meeting originally scheduled for Wednesday. The Miller-Meeks campaign said there is a “new significant discrepancy.” The campaign complained about the recount being off 12 ballots from the original count and canvass. An earlier press report said that Hart picked up 30 votes, but Iowa Starting Line said it could be 26 or 27 votes.

“No election results should be submitted to the Secretary of State until the proper procedures have been followed to verify their accuracy,” said Miller-Meeks for Congress attorney Alan Ostergren.

The campaign said they expect “full transparency” from everyone involved in the process in Scott County to ensure the votes were counted properly.

Scott County recount board reconvenes after board's absentee ballot totals showed 131 more ballots than recorded in the county's canvass of votes in #IA02 recount between @millermeeks and @RitaHartIA. Board of Supervisors were to meet to certify results today & is now postponed. pic.twitter.com/UIi8kPPImC

The Scott County Auditor says this will likely be decided in court, and with a race this close that is not surprising.

Iowa’s Small Business Saturday More Important Than Ever This Year

Reynolds Says Iowa Will Be Ready to Distribute COVID-19 Vaccine

Shane Vander Hart is the editor of The Iowa Torch.

Miller-Meeks: The future of Congress

Pate expanding post-election audits to ensure integrity of the vote

Reynolds Says Iowa Will Be Ready to Distribute COVID-19 Vaccine

What If There Is a Tie Vote in Iowa's 2nd Congressional District?

Get The Iowa Torch right in your inbox!

No Result
View All Result